The first ellen cherry* event was hosted in 2012, shortly after Josh opened Assorted Table. They quickly took off, with several experiences hosted in 2013.

Kristin Putchinski is the voice behind ellen cherry and Josh’s childhood friend. These multi-course events combine wine, food, and a live performance. We have paired up with some amazing chefs including Anthony Soriano, Michael Bader, Taylor Kastl, Joe Morrison, and Aaron Rivera.

There have been so many notable pairings during the ellen cherry Experience, however, one stands out: Argiolas Vermentino x braised beef. When this series of dinners were first created, each course had a white or rose wine and a red wine pairing. The crowd was shocked when the Vermentino outshined the red that was paired with it. But according to Josh, it was ‘NO CONTEST’! This is what makes wine + food so fun. 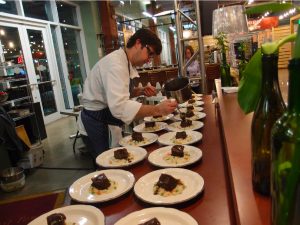 Formerly a wine supply for Ancient Rome, Sardinian wine production has waned due to susceptibility to Mediterranean conquerors. Many of the grapes are of Spanish origin since the island was under total control of the Crown of Aragon from 1409 to 1708.

In the mid-1900s, the mainland regions began purchasing ripe, concentrated bulk wine to use for blending but by the 1980s, only ¼thof the vines remained, as the need for bulk wine had dissipated. The winegrowers ripped up their vines to focus on other forms of agriculture due to Sardinia’s poor economy. Supposedly, there were also bribes from other regions to remove the vines—attempting to literally weed out the competition. Today, there is an emphasis on quality and utilizing regional grapes like: Vermentino, Catarratto, Grenache, and Monica.