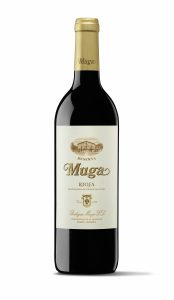 Dropping in a Rioja Reserva for the 21st day! This wine will need about 30 minutes to breathe.

Rioja (Ree-oh-HA) is a wine region in northern Spain’s Ebro River Valley which is sheltered by Sierra de Cantabria to the north and Sierra de Cameros to the south. It is the oldest Designation of Origin in Spain, dating back to 1925 when Spain’s designation system was created.

You may note that egg whites are included as an ingredient on the information sheet for Muga Rioja Reserva. Fining with the whites of an egg is performed by adding a small amount of egg white to the wine which spreads across the surface area of the wine and descends to the bottom trapping all of the particles. While this method is often listed under clarification, a lot of winemakers use it to improve mouthfeel or soften a wine.* It is a somewhat old-school or traditional method for fining, clarifying, or softening the wine to use egg whites. Isinglass, Milk Casein, and Gelatin are other animal byproducts that may be used for clarification.

Animal byproducts are typically introduced in the clarification or filtration stage of the winemaking process. To have a bright translucent wine and to avoid sediment deposits, producers may use a combination of the following clarification methods:

In this method, gravity does most of the work. After fermentation has finished, the wine sits for a period of time allowing the particles in the wine to settle to the bottom of the vessel. The wine is then pumped out into a fresh clean vessel leaving all of the nasty bits behind. This process is also referred to as ‘racking’ and may be repeated several times before the wine is bottled or rested for a maturation period. This clarification method can be timely, troublesome, and not very precise, BUT some producers maintain that the other methods are too harsh on the wine and remove some of the “je ne sais quoi” from the final wine.

Wines may be filtered more than once if necessary or at different stages of development. In this process, the wine is passed through a filter that quickly removes particles in the wine. Filter size and type depend on the goal of the winemaker. Sterile filtration is used when a winemaker has a concern about bacteria or remaining yeast cells spoiling the final wine. To catch ALL of the menacing microbial life, the wine needs to be passed through a filter with a small pore size (which according to  https://winemakermag.com/ is .45 micron filter pads).

This step is considered important by many winemakers to enhance a wine’s stability. In this process, a fining agent is added to a wine and binds to particles in the wine that cause haziness (proteins, polysaccharides, lees, or phenolic compounds). The fining agent settles at the

bottom of the vessel and the wine is racked off OR the wine is filtered to remove the fining agent and all the goodies that it has gobbled up. (Unfined and unfiltered wines are usually vegan!)

Bentonite Clay is “an impure clay formed by the weathering of volcanic ash.*” The clay has a negative electric charge that attracts the positively charged particles in the wine. It is introduced to chilled wine via slurry and drags all the impurities out of the wine. Another bonus: Bentonite fined wines are less likely to oxidize. PLUS IT’S VEGAN!

How do you know?

Some producers will include it on their label. We have found the vegan database on https://www.barnivore.com/ to be very helpful!